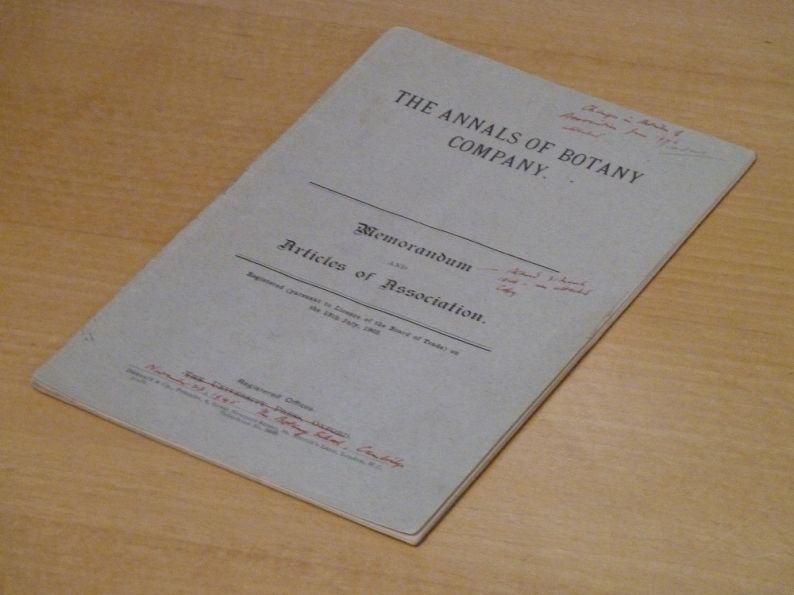 THE ANNALS OF BOTANY COMPANY
Memorandum and Articles of Association
Registered (pursuant to Licence of the Board of Trade) on the 13th July, 1903
Registered Offices THE UNIVERSITY PRESS, OXFORD

Licence by the Board of Trade
Pursuant to Section 23 of the Companies Act, 1867

NOW THEREFORE the Board of Trade, in pursuance of the powers in them vested and in consideration of the provisions and subject to the conditions contained in the Memorandum of Association of the said Company, as subscribed by seven Members thereof on the 3rd day of July, 1903, do by this their Licence direct THE ANNALS OF BOTANY COMPANY to be registered with limited liability without the addition of the word "Limited" to its name.

MEMORANDUM OF ASSOCIATION OF THE ANNALS OF BOTANY COMPANY

1. The name of the Company is "THE ANNALS OF BOTANY COMPANY".

2. The Registered Office of the Company will be situate in England.

3. The objects for which the Company is established are:—
(A.) To print, publish, sell and distribute the publication known as The Annals of Botany, and any other books, reports, magazines and periodicals relating to botany, and to acquire and exercise any rights in relation thereto, and to carry on the business of printers, publishers and booksellers:
(B.) Subject to the provisions of the 21st Section of the Companies Act, 1862, to purchase, hire, or other­wise acquire for the purposes of the Company any real or personal property, and any lands, buildings, furniture, fittings, conveniences and accommodation, and, so far as the license of the Board of Trade may from time to time allow, to sell, demise, let or dispose of the same:
(C.) To borrow any money required for the purposes of the Company upon such securities and on such terms as may from time to time be determined:
(D.) To invest the moneys of the Company not immediately required upon such securities as Trustees are authorised by law to invest in and on such terms as may from time to time be determined:
(E.) To do all such other lawful things as may be incidental or conducive to the attainment of the above objects : Provided that in case the Association shall take or hold any property subject to the jurisdiction of the Charity Commissioners for England and Wales, the Association shall not sell, mortgage, charge or lease the same without such consent as may be required by law, and as regards any such property, the Managers or Trustees of the Association shall be chargeable for such property as may come into their hands, and shall be answerable and accountable for their own acts, receipts, neglects and defaults, and for the due administration of such property, in the same manner and to the same extent as they would, as such Managers or Trustees, have been if no incorporation had been effected, and the incorporation of the Association shall not diminish or impair any control or authority exercisable by the Chancery Division or the Charity Commissioners over such Manager or Trustees, but they shall, as regards any such property, be subject, jointly and separately, to such control and authority as if the Association were not incorporated. In case the Association shall take or hold any property which may be subject to any trusts, the Association shall only deal with the same in such manner as allowed by law, having regard to such trusts.

5. The fourth paragraph of this Memorandum is a condition on which a license is granted by the Board of Trade to the Company in pursuance of Section 23 of the Companies Act, 1867.

6. If any Member of the Company pays or receives any dividend, bonus or other profit in contravention of the terms of the fourth paragraph of this Memorandum, his liability shall be unlimited: Provided further that no Member of the Council of Management or Governing Body of the Company shall be appointed to any salaried office or any office paid by fees, and that no remuneration shall be given to any Member of such Council or Governing Body except repayment of out-of-pocket expenses and interest on money lent. If any payment shall be made to any Member in contravention of the provisions of this section, the liability shall be unlimited of any Member who shall receive or make such payment after he has been advised in writing that it is unauthorised: Provided further that this provision shall not apply to any payment to any railway, gas, electric lighting, water, cable or telephone company of which a Member of the Council of Management or Governing Body may be a Member, or any other company in which such Member shall not hold more than one-hundreth part of the capital, and such Member shall not be bound to account for any share of profits he may receive in respect of such payment.

7. Every Member of the Company undertakes to contribute to the assets of the Company, in the event of the same being wound up while he is a Member, or within one year afterwards, for payment of the debts and liabilities of the Company contracted before the time at which he ceases to be a Member, and of the costs, charges and expenses of winding up the Company, and for the adjustment of the rights of the contributories amongst themselves, such amount as may be required, not exceeding one pound, or in case of his liability being unlimited, such other amount as may be required in pursuance of the last preceding paragraph of this Memorandum.

8. If upon the winding up or dissolution of the Company there remains, after the satisfaction of all its debts and liabilities, any property whatsoever, the same shall not be paid to or distributed among the Members of the Company, but, if and so far as effect can be given to the next provision, shall be given or transferred to some other institution or institutions having objects similar to the objects of the Company, to be determined by the Members of the Company at or before the time of dissolution, or in default thereof by such Judge of the High Court of Justice as may have or acquire jurisdiction in the matter, and if and so far as effect cannot be given to such provision, then to some charitable object.

9. True accounts shall be kept of the sums of money received and expended by the Company, and the matter in respect of which such receipt and expenditure takes place, and of the property, credits and liabilities of the Company, and subject to any reasonable restrictions as to the time and manner of inspecting the same that may be imposed in accordance with the regulations of the Company for the time being, shall be open to the inspection of the Members. Once at least in every year the accounts of the Company shall be examined and the correctness of the balance-sheet ascertained by one or more properly qualified Auditor or Auditors.

We, the several persons whose names and addresses are subscribed, are desirous of being formed into a Company in pursuance of this Memorandum of Association.

NAMES, ADDRESSES AND DESCRIPTIONS OF SUBSCRIBERS

Witness to the Signature of the above Francis Darwin — A. W. GRAY, Assistant, Herbarium, Cambridge, 8th June, 1903.

ARTICLES OF ASSOCIATION OF THE ANNALS OF BOTANY COMPANY

CONSTITUTION
1. The Company is established for the purposes expressed in the Memorandum of Association, and shall be governed as hereinafter provided.
2. For the purpose of registration the number of Members shall not exceed ten.

MEMBERS
3. Any person desiring to become a Member must be proposed in writing by a Member. A General Meeting, if approving of the Candidate, may elect him accordingly.
4. The rights and privileges of every Member shall be personal to himself and not transferable.

CESSATION OF MEMBERSHIP
5. Any Member shall cease to be such upon sending in his resignation to the Secretary.
6. A General Meeting may remove the name of any Member from the register whose continued membership shall, in the opinion of the meeting, be prejudicial to the interests of the Company, and he shall thereupon cease to be a Member. Such removal shall only take place if at least two-thirds of all the Members signify their approval thereof.

PROCEEDINGS AT GENERAL MEETINGS
11. Three Members shall constitute a quorum.
12. If within 15 minutes of the time fixed for holding a meeting a quorum be not present, the business of the meeting shall stand adjourned to such time and place in the next succeeding week as the Chairman shall fix, when any number of Members present shall constitute a quorum.
13. The Chairman of the Company shall be the Chairman of every meeting; failing him, the chair shall be taken by the Vice-Chairman. In the absence of both Chairman and Vice-Chairman the meeting shall elect a Chairman.
14. The decision of a General Meeting shall be ascertained by a show of hands. An entry in the minutes, signed by the Chairman, shall be conclusive evidence of the decision of the meeting.

VOTES
15. Each Member shall have one vote only. In case of equality of votes the Chairman shall have a casting vote.

COMMITTEES
17. The Company may appoint Committees of the Members for the purpose of carrying out resolutions of the General Meetings or otherwise furthering the objects of the Company.

REPORT, ACCOUNTS AND BOOKS
18.  True accounts shall be kept of the sums of money received and expended by the Company, and the matter in respect of which such receipt and expenditure takes place, and of the property, credits and liabilities of the Company, and subject to any reasonable restrictions as to the time and manner of inspecting the same that may be imposed in accordance with any regulations made by a General Meeting, shall be open to the inspection of the Members.
19. Once at least in every year the accounts of the Company shall be examined and the correctness of the balance-sheet ascertained by one or more properly qualified Auditor or Auditors to be appointed at each Ordinary General Meeting, and the provisions of the Companies Act, 1900, as to audit and Auditors shall apply.
20. All books and documents shall be accessible to the Members of the Company at all reasonable times.
21. At the Ordinary General Meeting in every year the Chairman shall submit or cause to be submitted to the Members a balance-sheet made up to as recent a date as practicable and duly audited, accompanied by a report on the business of the Company during the period covered by the accounts.

BYE-LAWS
22. Bye-laws which are not of such a character as to form part of the Articles of Association so that they could only be made or altered by special resolution, and alterations and rescissions in and additions to any Bye-laws, may be made by resolution of a General Meeting.

NOTICES
23. A notice may be served upon a Member either personally or by sending it through the post in a prepaid letter or postcard addressed to him at his registered address.
24. Any such notice if served by post shall be deemed to have been served at the time when the letter containing the same is put in the post, and in proving such service it shall be sufficient to prove that the letter containing the notice was properly addressed and posted.
25. No Member not having a registered address within the United Kingdom shall be entitled to any notice, and all proceedings may be taken and had without notice to such Member in the same way as if he had received due notice.

NAMES, ADDRESSES AND DESCRIPTIONS OF SUBSCRIBERS
(signatories and witnesses as for the Memorandum)

THE COMPANIES ACT, 1929
SPECIAL RESOLUTION OF THE ANNALS OF BOTANY COMPANY

At an EXTRAORDINARY GENERAL MEETING of the above-named Company, duly convened and held in the rooms of the Royal Society, Burlington House, W.1. , on the 14th day of May 1946, the following Resolution was duly passed as a SPECIAL RESOLUTION:

RESOLUTION
That Articles 16 and 17 of the Articles of Association of the Company be amended to read as follows :—

THE ANNALS OF BOTANY COMPANY